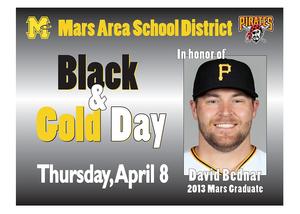 
Students and staff are encouraged to wear black and gold colors to cheer on Bednar, a pitcher for the Pittsburgh Pirates who is listed on the roster for the team’s Home Opener against the Chicago Cubs at 1:35 p.m. on Thursday, April 8.


A four-year member of Mars Area High School Varsity Baseball Team, Bednar continued his baseball career at LaFayette College (Easton, Pa.), before being drafted into the San Diego Padres’ farm system in 2016 and called up to the major league team in 2019. In January 2021, the Padres traded Bednar to the Pittsburgh Pirates.
For more information, visit https://www.mlb.com/player/david-bednar-670280.