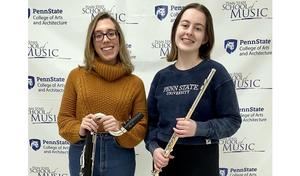 Katie Olsen (Class of 2017) has played bass clarinet in the Symphonic Wind Ensemble for three semesters and Michelle Manukas (Class of 2018), who plays flute/piccolo, is in her first semester with the ensemble. Auditions for the ensemble, which is under the direction of Dennis Glocke, Penn State University Director of Concert Bands, are held in during the first week of classes each semester.

“(Glocke) has truly set the standard and level of expectations of our ensembles and musicians,” says Manukas. “I am incredibly excited to play in an ensemble of such caliber, and to be performing in the hall of every musician’s dream.”

“Words cannot even begin to express how thrilled I am to perform at Carnegie Hall with these incredible musicians,” adds Olsen. “I am especially excited that Michelle and I will be able to represent the Mars Area School District together.”

Throughout her high school career, Olsen was selected to perform in multiple PMEA (Pennsylvania Music Educators Association) events, including Junior Chorus in her freshman year; District Chorus, Honors Band, District Band and Region Band as a sophomore; and for Honors Band and District Band in her senior year. She also served as a Drum Major for Mars Area High School Marching Band.

Both Manukas and Olsen would like to express their gratitude to Mars Area music teachers Jennifer Kennedy, Tammi Redmond and Mark Rodgers as well as former teachers Michael Holupka (retired) and Dr. Chris Protho.

“(They) are all such a big part of why I am here today! Thank you so much for pushing me and inspiring me to keep playing music!” says Manukas. “Without them, I never would have been able to even dream about performing on one of the biggest stages in the country,” adds Olsen.

The annual President’s Concert Series provides an opportunity for Penn State students to perform in some of the most renowned venues on the East Coast. University ensembles have traveled to Heinz Hall (Pittsburgh), the John F. Kennedy Center for the Performing Arts (Washington, D.C.), Carnegie Hall (N.Y.), The Kimmel Center (Philadelphia), Strathmore (North Bethesda, Md.), and The Forum Theatre (Harrisburg).